The most moving lecture at the Vienna meeting of The World Academy of Sciences that I'm presently attending was a talk by Albert Sachs, anti-apartheid campaigner and former constitutional judge from South Africa. He has a colourful history. During the apartheid era he was exiled to England and later Mozambique, where in 1988 the South African security services placed a bomb in his car. He survived the attack but lost an arm as well as an eye. What happened after that is something to which I'll return below. 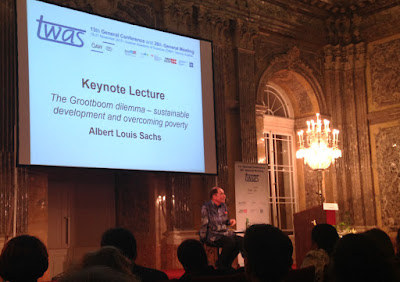 The "Grootboom dilemma" that you see in the title of his talk refers to the case of a poor woman called Mrs Grootboom who, along with several other shanty dwellers, was served an eviction notice because their shanties were on private land. The High Court was sympathetic to the shanty dwellers and ordered the government to provide them "rudimentary shelter irrespective of the availability of resources". On appeal, the Constitutional Court (with Albie Sachs as one of the judges) again sympathised with the shanty dwellers and ruled that "the state was obliged to take positive action to meet the needs of those living in extreme conditions of poverty, homelessness or intolerable housing". But at the same time, this court held that "land invasions" were not acceptable.

The above details are available on Wikipedia. But what moved me greatly during the talk was the question that Albie Sachs repeatedly raised and that had clearly exercised him as a judge: how could the state not intervene on behalf of people living in distressing conditions? And at the very same time, how could the state allow people to grab private property? The talk beautifully evoked the tension created by these two contrasting, but important, legal and constitutional concerns. What came across was that the judges did not blindly uphold one, or the other, of these concerns. Rather, they pro-actively convinced the government to find a compromise solution and ease the living conditions of the homeless as expeditiously as possible.

In the end though, Mrs Grootboom died before permanent housing could be found for her and her family. Albie Sachs said the image of her lying in her bed with a plastic sheet for a roof and the rains due to arrive, kept haunting him. "What have I done to deserve this?" he imagined her wondering.

I don't want to go into too many details of the impact this discussion had on me. But I will admit to an enormous feeling of shame that I personally have not focused much of my life on improving the lives of socially deprived people in India. I see it as a sign of the greatness of the South African courts, as well as the government, to have taken so seriously their obligations towards the poor and deprived.

Now let me return to the impact of the bomb. Albie Sachs recuperated in London and then returned to South Africa to help in drafting the new democratic constitution after which Nelson Mandela made him a judge of the Constitutional Court. On the way, he came up with the notion of "soft vengeance" which is in the title of his autobiography on which a  recent movie has also been based. This notion is based on the Gandhian view that "an eye for an eye will make the world blind". In the case of Sachs, this could have been taken quite literally - he had lost an eye, as well as an arm, and South African nationalists were vowing to avenge this on his behalf. But Sachs disagreed with vengeance based on violence. He felt that helping to bring in democracy and working for the poor were, in fact, his soft vengeance. I'll leave you with his words on the subject:

"The whole achievement of our wonderful new democratic constitution is soft vengeance. It totally smites the horror, the division, the hatreds, the separations of apartheid but it does so in a way that is benign and creative and humanising. It's a far more profound vengeance than doing to them what they did to us."

That is a really beautiful and inspiring quotation.