When I was 12, my school decided to hold aptitude tests to help the students determine what career they would be suited to pursue. I did quite well in overall aptitude, but completely failed to show the desired result -- a strong preference for science over the arts, or vice versa. The priest in charge of this test looked rather blankly at me and said I could do either one. So I went to my parents and asked them what to do. Their response was immediate: "you decide".

It was a long time before I understood how unique my parents were in this regard. Whether it was a matter of spending evenings out with friends, or spending my (very limited) pocket money, or making career choices, the response was pretty much the same: "you decide". But at no point did I feel they were washing their hands of my problems. I sensed that they cared a lot, and both of them were known for their strong opinions on everything, but they held back trying to influence me so that I would feel responsible for my own choices.

There was one caveat, though: I was made to understand that if I wanted money from my parents (even as pocket money) then I had to be accountable to them for it. One day, early in my undergraduate days, I managed to get a National Science Talent Scholarship which paid a small monthly stipend. My parents promptly suggested I stop taking pocket money from them and use this scholarship to pay for my college lunches and other small expenses. I was outraged -- was it not my right as a college student staying at home, to get pocket money from them? Shouldn't I be banking my scholarship money for future use? My mother's response was "you'll thank us for this later on". And she was absolutely right. There is hardly anything that can beat the feeling of being independent. Though let's not exaggerate here, I was staying at home and eating dinner and breakfast at home so I wasn't quite independent in any true sense. Still the idea stayed -- if I spend my parents' money then I'm accountable to them, if I spend my own then I don't owe any explanations. I think this made me more responsible with both kinds of money.

Another peculiarity of my parents was that they rarely took my side, or propped me up, in social situations. If I was playing with cousins who were visiting our house and a conflict arose over toys, it was "let them have the toys, they are our guests". If the same conflict arose when we were in their house, it was "let them have the toys, we are their guests". This was so infuriating at the time. But when I look at kids whose parents followed the opposite dictum: "yes darling you shall have the toys and I will fight everyone in town for your right to have them" -- well, these kids have largely become psychological wrecks, and it's no surprise. Nothing can lower your self-esteem more than to know that whatever you possess is due to parental assistance and not due to any effort coming from within yourself.

These days there is a meme circulating on Facebook that completely gets on my nerves. Here is a screenshot: 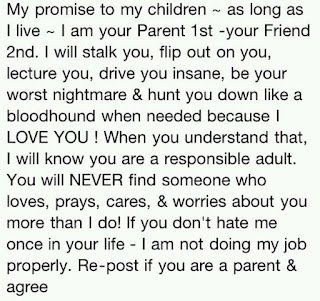 This obviously comes from parents obsessed with themselves and their own self-importance. It would be funny if it were not so tragic. I've encountered so many examples of children ruined by this attitude. There was a boy in my school whose mother's obsession was to make him a genius. She would contact successful students who were a year ahead of him (myself, in particular), copy their notes and pressurise her son to learn everything before his year even started. The inevitable result was that he was the only student in the entire school to get a third division in his final year. Later I learned that he had died from drug abuse.

Most cases are less dramatic, but I have seen a bunch of kids growing up around me -- children of friends and relatives -- and the style of parenting is quite visible on the children. To be sure, important roles are also played by genetics, by the environment outside the home and even by epigenetics, so we can hardly blame (or credit) parents for everything. And yet, when things don't seem quite right with a growing child, there is so often a readily visible parental obsession behind it.

One particular model that I think is very damaging (and is the opposite of the model I grew up with) is that of the family as a fortress. In this view, the family is organised on the basis of strongly expressed loyalties. Each member publicly gushes about the other. Mothers say how wonderful their children are. Fathers post pictures of themselves with their "brood" as though somehow they are their patron saints and benefactors. Children are careful not to question the model because they would pay a price for disloyalty. Instead they quickly learn to exploit the system by paying lip service to it. If any member shows a weakness, the rest of the family steps in to cover it up. It all sounds lovely up to a point, but the missing ingredient -- individual responsibility for oneself -- ensures that this is a fragile and damaging arrangement. In the long run it rarely fools anyone outside and doesn't much benefit those inside either.

To close on a positive note, I would like to tell a story about my mother. Once a neighbour came over and gushed about how her son had scored 72% in the exams. She went on and on about his brilliance for ages. My mother smiled patiently through it all but said nothing. When the neighbour left, I exploded: "Ma, why didn't you tell her that I got 95% in the same exam?". There was a hint of pride on my mother's face when she replied "We don't tell other people these things, dear".

Posted by Sunil Mukhi at 9:36 AM No comments:

I recently gave a talk titled "Goals, Models, Frameworks and the Scientific Method" at a leading Indian institution. This was based on my Current Science article with the same title, which you are welcome to read here. In the article and talk, I attempted to de-confuse the word "theory" into three distinct words: goal, model and framework. Then I explained that "string theory", my field of research, should be thought of as a framework rather than a model.

After the talk, I met the former Director of this Institute over tea and he pointed out that there had been many books and articles that were very critical of string theory. I told him that my talk and article were partly a response to these. He smiled pleasantly and replied "Anyway, I take some pleasure in the discomfiture of string theorists". I'll confess that his comment left me a little discomfited at that moment. But as things turned over in my head, I realised it was a nice illustration of my favourite German word, "Schadenfreude", which translates as "pleasure derived from the misfortunes of others" (actually I have other favourite German words, like "Weltschmerz" and "Bremsstrahlung", not to mention "Schweinhund", but we'll leave these for another day.)

Wikipedia tells us that this pleasure is particularly acute when the unfortunate person is seen to have deserved their misfortune. And I suppose we all indulge in a bit of Schadenfreude, myself included. It can be quite harmless and enjoyable. For example, today the nation is enjoying the spectacle of Congress workers managing to burn themselves while attempting to burn an effigy of the Prime Minister. This is such fun! But when the desire to see one's rivals suffer takes root in organisations, communities or countries, and outstrips the desire for everyone to succeed together, then there is something to worry about.

Here is an interesting example from academia. The Superconducting Supercollider planned in Texas some decades ago would certainly have found the Higgs particle (and perhaps others) much before the LHC, had it been completed. The project was aborted in 1993 when the US Congress refused to fund it, following Congressional hearings in which - in particular - the project was opposed by physicists in disciplines other than high-energy physics. In this Scientific American article, David Appell writes:

When the SSC was finally canceled, the late Rustum Roy, professor of materials sciences at The Pennsylvania State University, expressed his joy to the New York Times. “This comeuppance for high-energy physics was long overdue.” Roy said.

And here is what Steven Weinberg, in this article for the New York Review of Books, says about the same event:

I took little pleasure from the observation that none of the funds saved by canceling the SSC went to other areas of science.

Even though Weinberg comes off looking much better, one can't help suspecting there was Schadenfreude on both sides. But no scientist seems to have gained from the cancellation -- and scientific progress lost a number of years.

On this subject I have a small personal tale to tell. In the mid 1990's I was visiting the Institute for Advanced Study, Princeton and had the chance to dine with the legendary Freeman Dyson (he's still going strong at the age of 92, but at the time of this story he was a mere lad of 72 years!). Dyson was boasting about having successfully opposed the SSC. "Colliding tables and chairs! You can't possibly make any sense out of it" he declaimed at dinner. His point was that hadron colliders inherently produce a huge mess of particles and it would be impossible to spot the new one, if any. So he believed a proton-proton collider at those energies simply could not uncover the Higgs. Unfortunately for Dyson, the LHC is precisely such a hadron collider and it has worked spectacularly well. So I'll confess to some Schadenfreude about Prof. Dyson's incorrect prediction.

As for the discomfiture of string theorists, if that brings a ray of light into anyone's humdrum lives, we really shouldn't grudge them.

Posted by Sunil Mukhi at 6:08 PM No comments: