It's much more fun to make up one's own versions of history, as I've been doing ever since I got to Bali. The real story supposedly has to do with Balinese kings and their courtiers committing puputan -- ritual mass suicide -- in response to a Dutch onslaught (as who wouldn't, if the option was cold milk for lunch and pea soup for dinner?). But I like to imagine that it happened differently.

In version 1, Australians up in Perth were frightfully bored, as the nearest nightlife was over in Sydney. This was a 5-hour flight away, and was in any case full of more Australians. Then the Perthians, or whatever they call themselves, discovered that the fragrant isle of Bali was just 3 1/2 hours away. This island too had no nightlife but it was full of people called "Balinese" who wore flowers over their ears (and those are just the male Balinese!) and could be induced to do just about anything as long as it involved aesthetics and grace. The Balinese agreed to open restaurants and hotels where the hospitality was quiet and gracious, the food divine and the pricing modest. All they wanted in return was sufficient income to live a quiet and graceful life. This suited the Australians just fine. Although Bali soon became a province of Australia, a delicate fiction was maintained whereby it belonged to its nearest neighbour, Indonesia.

Story 2 goes like this. A chunk of India the size of a moderately large island got detached and drifted away. As it drifted, the new islanders took stock of the situation. "We're finally free of India!" exclaimed the first chieftain. "So let's now invent our own lifestyle". "OK", the other chieftains chorused, "where shall we start?". Some suggested abandoning the Hindu religion, but others said no, it had some nifty gods and in any case it was such a flexible religion that pretty much anything could be done under its banner. So they decided to abandon only the things they didn't like. Vegetarianism was the first to go. "Then the nearest available dosa will be in Malaysia" fretted one of them, but the others, who had never liked dosas anyway, promptly silenced him. They decided their diet would consist of rice, seafood, chicken, pork and beef, specially the last two. "Even on religious occasions?" asked the pro-dosa faction. "Specially on religious occasions" the others chorused, "and moreover we'll have a religious occasion every month, on full moon day". And so the national dish of Bali became "Babi Guling".

But the next brilliant idea would transform the island unrecognisably. "Let's give up spitting when we walk and honking when we drive", suggested a chieftain. At this, the others looked blank. "This is possible?" they asked. "Sure" the chieftain replied. "It will make our life infinitely more pleasant. Can you imagine dining by the roadside and being able to hear yourself talk?". The idea soon began to catch on. "If we don't spit, will we be more healthy and therefore able to smoke whenever we like?" another demanded. "Sure" came the answer, though what was actually said was "becik becik" since they now had their own language. Soon Bali was invaded by foreigners from every country, though primarily from the neighbouring ones. "Is your country like India?" the foreigners asked. "Becik becik", the Balinese replied, "except we don't spit anymore. We also don't honk, or cheat visitors, or play 20-20 cricket". "Lovely" said the foreigners and the number of tourists going to Bali per year grew to about one-half the number bound for India, despite the incredible disparity in size.

In version 3, Bali started out with a bunch of Balinese who already didn't spit, or honk, or cheat, or swear, or harbour any ambition to dominate the world. Their only ambition, if one can call it that, was to eat tasty, healthy fresh food in a quiet place. And wear flowers above their ears.  Whenever possible they would work, patiently and quietly, emitting gentle smiles if disturbed and lighting up a cigarette every now and then. They prayed in the mornings, making neat little packages out of banana leaf and containing flowers and a little rice -- which was always first offered to a deity before being consumed at home. But then someone advised the disciplined Balinese how they could get rich. Being open-minded, they gradually started to adopt customs from neighbouring countries, such as "malls" and "go-go dancers". This brought in  tourists and made them richer and richer. But they didn't know what to do with money, since they only needed it to eat, pray, love and smoke, and not too much was needed for all that. This led to runaway growth, with the Australians and other friendly neighbours dropping in and staying for months at a time, spending all their money and tiring themselves out by partying on the beach all night. Meanwhile the Balinese just went on eating and smoking and looking more and more relaxed.

The food in Kuala Lumpur is wonderful, as long as you remember that over here "air" means "water" and "susu" means "milk"... I also saw the following dish advertised -- but did not actually try it! 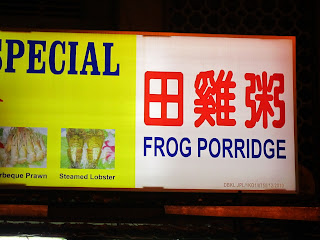 I'm back to blogging after a hectic month and more. The proximate stimulus for my return is the recent Supreme Court interim judgement on the Babri Masjid case.  The Supreme Court has wisely described the Allahabad High Court judgement of September 2010 as "a strange order".  Blogging about it here on the day after that judgement, I had wondered if my late father -- who had once been a high court judge -- might have raised the following questions about it:

"Should an aggressive action lead to benefit for the aggressor in the form of a compromise? Are religious groupings the appropriate beneficiaries of a title suit when public interest is involved? And can the law opine on the birthplace of a god?"

The learned Supreme Court judges have so far not addressed these questions. All they've found strange about the High Court judgement is its idea of dividing the land into three portions: one to the Nirmohi Akhara (a Hindu group believing in no attachments, other than -- strangely -- to a piece of land where the Babri Masjid stood), one to the Waqf Board (an organisation constituted by Parliament to be in charge of Muslim holy places) and one to Lord Ram himself, in his current reincarnation as a "shapeless and formless" legal entity.

While so many people welcomed it as a "compromise", I had found the Allahabad High Court judgement bizarre from a legal and ethical perspective. The mosque was toppled in 1992 before the very eyes of the nation, following a vicious campaign led by L.K. Advani that collaterally damaged the fabric of this country and propelled the BJP to power. One would expect a judgement on this politically staged catastrophe to redress such a major legal violation, that took place in living memory, by restoring the status quo ante (or, given the warlike nature of the supposedly devout parties concerned, perhaps the status quo ante bellum).

Nothing of the sort was evident in the Allahabad High Court judgement, which on the contrary sought to twist religious sentiment into legal fact and thereby debase India to the level of the many nut-case theocracies  populating the planet. (If you think I'm overstating the issue, please compare the Wikipedia definition of "theocracy": "a form of government in which a state is understood as governed by immediate divine guidance", with Justice Dharam Veer Sharma's description of the disputed land as "It is personified as the spirit of divine worshipped as birthplace of Lord Rama as a child.")

It's now up to the Supreme Court to remedy this. I have always had considerable faith in this court (even though it famously bent just a little to please Indira Gandhi) and I've always believed they would see through the fallacious and apparently motivated Allahabad High Court judgement. Yesterday they took the tiny step of describing the judgement as "strange" but a larger step will come. If, as I expect, they will attempt in some way to restore the status quo ante with respect to December 1992, the land will essentially go back to the Sunni Waqf Board. Then the BJP, which has actually welcomed the recent Supreme Court observation, will find itself all confused and lost, and will presumably have to save face by staging another agitation. Or even another vicious campaign (it's easy to guess who would lead it this time). Will India descend into the loony bin of religious fundamentalism all over again? Stay tuned.
Posted by Sunil Mukhi at 1:22 PM 5 comments: