Today's Times of India carries, on an inner page, a fascinating article titled "How Shukla saved Rao govt in '92". Mr V.C. Shukla was parliamentary affairs minister in the Congress government of the early 1990's, and by his own recent admission to the press, he managed to help this government narrowly survive a no-confidence vote. As they were just one vote short of a majority, Mr Shukla located a member of parliament from a different party who could be induced to vote in favour of the ruling party.

His account of the inducement is what makes the story fascinating. "I promised him chairmanship of parliamentary committee, foreign trips. I used permissible inducements [italics mine]... no money was discussed." So that's alright then? I rather think not. A bribe is defined as "money or any other valuable consideration given or promised with a view to corrupting the behavior of a person". Chairmanship of a high-profile committee, with all the power that brings, as well as foreign trips, certainly count as "valuable consideration". So Mr Shukla bribed an MP on behalf of his party, and he feels this is quite acceptable to admit today just because the bribe was not paid in cash. The journalist breathlessly reporting this tale (Akshaya Mukul by name) also seems unaware of anything morally out of place.

Courts of law in India are fortunately not so literal-minded. When dowry is demanded and paid, it doesn't become OK just because it was paid in motorcycles and TV sets rather than cash. People have gone to jail for just such actions. But then, motorcycles and cash certainly have an interchangeable nature. Foreign trips, and chairmanships, are not saleable or tradeable. Could that be why Mr Shukla considered them permissible inducements?

In this connection I must trot out one more of my "keen" observations about public service, whether rendered by politicians towards their constituents or academics towards their underlings, and the collateral that gets skimmed off without anyone noticing. The following photo helps illustrate my point: 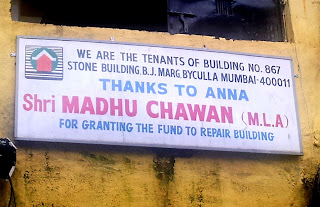 An elected representative has, evidently, sanctioned money from a fund (that originates with the taxpayer) to repair a building in Bombay. Why have the tenants spent their own money to put up a notice thanking him? Does he deserve public thanks in the first place, for doing what he was elected to do and with money that's not his own? It's clear the prominent banner will boost his profile, which may in turn favourably impact him at the next elections. And perhaps that's not a totally bad thing in today's environment, where performance is rarely considered when it comes to re-electing politicians.

But now let's turn the spotlight a little closer, to the community within which I (and many of my readers) exist: the academic community. I can do no better than quote some lines from a talk I presented a few days ago at an Ethics workshop in Delhi. I spoke of a type of academic, frequently found in administrative positions, who can be described as:

“Mister 10%”: skims off benefit to self in exchange for professional actions, e.g. Head of Department gives a promotion or financial allocation in exchange for loyalty or co-authorship.

I suspect many of my readers are aware how common this is. But I only understood its pervasive and universal nature after I became head of my department two years ago. All of a sudden I found it my pleasant duty to disburse a certain quantum of funds for computational equipment, and conference travel, to the faculty members, post-doctoral fellows and students of my department. All taxpayer's money, of course. I'm sure I haven't done a perfect job, but have tried to follow a sensible combination of rules, procedures and common (including scientific) sense. And more than half the time, I've received such effusive thanks - sometimes a virtual threat of being embraced - that it's led me to wonder. Is there any "cashable value" in such thanks? Can I selectively manipulate the people who are grateful to me in order to serve my own agenda?

The thought still fascinates me. Now if only I can put together an actual agenda, before my "gratitude miles" expire....

The particular events that you have pointed out lends itself to a generalised formula:
Corruption+(faux) welfare = power; with a positive reinforcing feed back loop (power to corruption). IMHO, this is one of the most dangerous vicious cycles, threatening all democracies. Sadly, I dont see any reasonable method to break this cycle either.