There's a BBC weather report that still sticks in my mind though I viewed it at least a decade ago. That year the monsoon was showing signs of failing in and around Bombay. July had been largely sunny with very little precipitation and if it didn't rain soon, the city's water supply would be in a lot of trouble. During that stressful period I turned on my TV to see a cheerful BBC weather-person wave her hands airily (why do they always wave their hands airily?) in the direction of Bombay on the map, and say "the weather in the West of India is fine". I felt like screaming: "it's not fine you dummy!!!".

She was using a word that, in Britain, is synonymous with "sunny". The Oxford English Dictionary offers "bright and clear" as one of the meanings of "fine", but the word originates from Latin via Old French and its original meaning is "of very high quality". It's only British weather that establishes a connection between the two meanings.

What I wonder is, why don't weather-people stick to words that have a well-defined scientific meaning (e.g. "sunny") rather than those which include a value judgement, like "fine" (and while they're taking my advice, could they please stop waving their hands as if they're swatting gigantic Finnish mosquitoes!!).

My memory of the incident above was revived by a new and highly loaded adjective that's started appearing on my Android smartphone of late. Accuweather.com, from where it loads its weather report, describes Bombay's weather today as "dreary". This offended me instantly. Bombay can be hot and humid, and today it's rather hot and quite humid. That's typical October weather and it comes as a slight relief after all the rain we've been having. 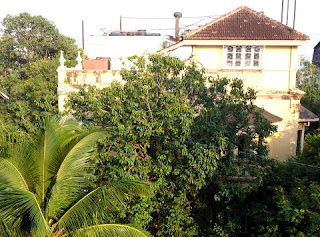 Is it dreary? Look at the photo, taken from my window a few minutes ago, and then at the OED's account of the origin of "dreary":

The photo certainly doesn't look melancholy to me, in fact it never gets melancholy around here. As for sorrowful... I can think of sorrowful German and English cities (Potsdam and Durham come to mind right away), but I'm sure their weather reports never say "dreary", even when it is.

Anyhow I expect this problem will go away in the next few decades once India becomes a dominant global power and wrests control of the weather reports. If I'm still alive, I'll be composing this report for Vancouver in mid-summer: "damp and chilly, major risk of depression, travel advisory in effect"...

While growing up in Delhi and reading Enid Blyton and similar authors, I could never understand why would anyone hate rains.

Days did get in Israel, and now do get in Lyon, sorrowful and dreary and
melancholic on not finding your wonderful blog posts

Hi Sunil...finally getting down to reading your blog.
Rahul DSilva