Vignette 1.  I arrive from Bombay via Frankfurt at Eleftherios Venizelos airport in Athens and board a bus to the KTEL terminal in the city centre. No sooner have I placed my suitcase on the rack than I hear a voice call "Sunil!". I look up to see Chara Petridou, possibly my only Greek friend in Greece (other than Costis whose wedding I've come to attend). She has arrived from Thessaloniki to spend a weekend going to the theatre in Athens. I haven't seen her in a year and it's one of the most amazing coincidences that we should meet on the airport bus. It's just as well she recognised me,  since I'm timid about these things and had I seen her first, I'd have simply thought "how similar all these Greeks look" and left it at that.

Vignette 2. A bunch of kids playing on bicycles at the Nafplio seafront. Their conversation goes roughly like this: "diphtheria metaphor parabola thesis antithesis diploma ichthyoid". I'm impressed with their erudition, but it turns out they are actually saying (in a language which is alas Greek to me): "let's ride as fast as we can and try to scare the American tourists!". This they do, with some success, but then one of the teenagers is careless and tumbles off his bike. His friends gather round to jeer at him. Still prone on the pavement, he raises a fist and shouts something very much like: "Eleftherios Venizelos"!

Vignette 3. An intriguing new marinade, perhaps? I'll let the picture speak for itself. 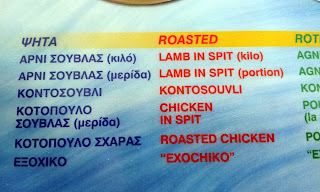